Space to Jump, Esc to Pause

2D Auto-Runner game project submitted for the 2021 GameDev.tv Game Jam, in which the theme was "All that glistens is not gold". You are a billionaire playboy trying to become down-to-earth as you’re running through the city trying to make it to your date!

Jim is a billionaire socialite who woos women with his riches and luxurious offerings. However, when he meets the love of his life, a humble girl from a small town named Cathy, he soon realizes that his usual methods to woo women won’t work. In order to win her over, Jim must prove that he's not consumed by materialism and riches. He manages to convince her to give him a chance, and he begins his trek to their agreed meet-up spot for their date, with absolutely nothing in his pockets. However, his materialism is not easily overcome - Jim suffers from “money-vision,” allowing him to see loose change and money everywhere. Thus, Jim must make it to his sweetheart without having collected too many gold coins, else his pockets will become too heavy and prevent him from making it on time. 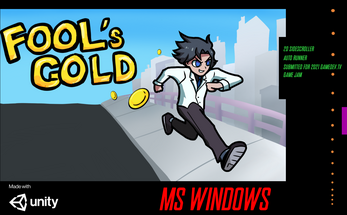 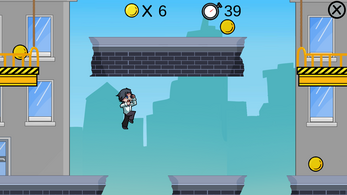